Oh my goodness Heather Haydock, that husband of yours is a diamond geezer! Not only did he carry my sticks for the last part of our nearly 12 hour ordeal, he walked quietly and patiently with me while I muttered the words to ‘One Man and his Dog’ to make my feet keep moving in a last gasp effort to get to the King’s Arms in Shap. And it had all started so promisingly.

I’d woken up a bit early but in time to hear a real dawn chorus. About half 4, a Babel’s tower of birds trilled and tweeted for a good 5 minutes or so in unison.  Surprisingly harmonious too.

Our plan, on this bright sunshiny day, was to do the walk up as far as Kidsty Pike (the highest point on the Coast to Coast walk at 2560′) and then, instead of attempting the very steep descent here, we were going to go up along the tops and then head east following a more gentle path. There wasn’t really a difference in miles, it was like two opposite sides of a square and none of us fancied going down something that was even steeper than Dent Hill from Day 1. This alternative route past High Raise was clearly marked on all the maps and been recommended by one of our colleagues at work and the B&B owner in Patterdale who was a very seasoned walker so it all sounded kosher. I was master navigator today and a bit nervous, what with having zero sense of direction, but the others were all ready to help where I needed so I thought what could possibly go wrong.

We set off after another great breakfast and made our way out of the village. The ascent was a gradual, not too muddy, path. past Angle Tarn.

Which was good as I wanted to keep my boots dry today. We met several fellow walkers en route and everyone was in pretty good spirits as it was such a lovely day. Our alternate route veered north before actually getting to the pike but we thought that as it was so close we’d go and stand at that point and look over at Haweswater Reservoir. A terrific view. Ahead, the outer edges of Cumbria and flatter, greener land. Behind, the mountains, including the snowy topped Helvellyn Ridge. This was close to our last goodbye to the Lakes and I wish now that we had kept to the route and dropped down there. Not only because we would have not got lost but also symbolically, it kind of seemed appropriate.

So we walked north over the tops and got to the cairn on Wether Hill as stipulated. It had been a long, tedious, often muddy way to that point and I’m not sure I could have recommended it even if we had got things right. We should then have met a path that went South East for a bit and then East but nothing seemed to be there. Some of the guys followed our original way further and found one going East but that would have brought us out much higher up than we wanted as so we retraced our steps to the cairn. Paul even checked the coordinates on the map with where we were and we were definitely at the right spot.  One option would have been to walk all the way back to the Pike but I was hoping that was not going to be necessary and finally we decided to take a very faint path that was headed roughly in the right direction. It took a while to trek because it kept disappearing and reappearing further on.  Quite often there were little hillocks that you walked up that stopped suddenly like mini cliff edges.  You either had to walk back round or attempt to jump down, as Julie tried to do, One second I saw her stuck on one of these mounds and getting a helping hand from Sally. The next, she’d disappeared completely and Sally was down on her hands and knees. Luckily, the peaty soil gave a soft landing and it was a little light relief in quite a serious situation.

Eventually we found a good, clearer path that was heading north east.  We took it as we all just wanted to get off the hills before we were totally knackered.  It brought us out into a farm just as the farmer was out walking his dogs.  He was very friendly (although the dogs looked a little jumpy) and sadly confirmed that we were more north than we wanted to be.  A little less than a mile from Bampton where the famous ‘Withnail and I’ telephone box was.  At that pronouncement my ears pricked up.  Although we were all shattered and not looking forward to the 5 miles or so left to hike I wanted a picture of that telephone box.  Luckily we had to walk through Bampton and I got my snap. 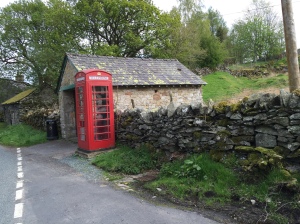 But the phonebox didn’t work!  We wanted to call the King’s Arms to let them know we’d be late and none of our phones had a signal. A text to Simon and Heather finally made it out and good job as they were due to close the kitchens at 8.

We got there at about half 8 and the chef had stuck around for us. Our final count according to Paul was over 21 miles. But frankly, the biggest thing I felt above the exhaustion, was relief, to be safe on the ground. It was a little bit scary at times to tell the truth and we were supremely luckily that the day had been so dry and clear. But oh my goodness we’ve got to do another 21 tomorrow!