After spending three and a half months training and building up my strength and stamina to something a little more than I had before, this last fortnight of enjoying the sunshine and the eating and the hardly doing any running at all has felt good. Really good! But at the back of my mind I’ve got Sunday looming and, with just three days to go, I’m liking this limbo land less and less.

I’m excited.  I’m nervous.  But now I just want it to start.

My cold has pretty much gone, which is good, although I need to remember to pack some tissues to blow my nose on.  I’ve always managed to forget them so far and have been attempting to refine the art of expelling the contents one nostril at a time on some grassy wayside patch with varying results.  You don’t want to know what happens when I misjudge the wind direction.  And should I try anything like this on the day it will be the law of Sod that gets the camera to zoom in on me at that particular moment.  It cannot happen. Tissues must be not be forgotten!

I’ve made a big list of things to remember and building a pile in the corner of my bedroom.  Kit, registration form, photo id, food gels, immodium (just in case the nerves get the better of me), suncream…  Having said that, Sunday is looking a bit cool, overcast and rainy.  Fantastic.  That’s on my side.  I’m trying to eat well ish  Yesterday I ‘carb loaded’ at Pizza Hut’s all you can eat lunchtime special with my running club buddies, and today someone brought in loads of cakes to work so the ‘well’ is very ishy at the moment. But I’ve not been drinking any alcohol for the past few days and lots of water so that’s good, right?  I can’t do any more so now, it’s in the lap of the gods.

I’ve been thinking about how my training has gone as I have time now to reflect.  At the beginning I did have a plan worked out.  It had involved going to the gym alongside doing my running, to do some cross training like cycling and rowing or something like that.  But after the first couple of weeks I stopped going because I did not feel motivated.  It just seemed so tedious.  And plus I could never run more than three miles or so on the treadmill as there is something very odd about having an exact rhythm. When you run outside, even on a seemingly straight path, there are tiny undulations and changes underfoot that cause your pace to vary here and there.  And there’s AIR.  I felt so hot on the treadmills that I found it too difficult.  And I’m rubbish with difficult. So I cancelled my membership at the beginning of February and have not done anything else apart from my three or four runs a week and the occasional bit of cycling.

I could have definitely done more. But, honestly, I’m just not that single minded.  You have to be really driven and focused and be willing to put yourself through some pain to make a serious stab at this. That is not a description of me!  But I’ll get better at it incrementally, gently, by degrees, so that by the time I do my next marathon (had I mentioned that I’m doing another one?!), in Athens in November, I’ll be a little bit stronger and I’ll keep the enjoyment of running. 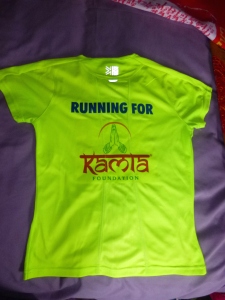 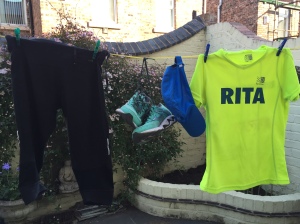 Got my T-shirt printed with the charity on the back and my name is big letters on the front.  With my bright blue hat and mint green running shoes you can’t miss me!