I knew it was going to be a tough ask to try and do 20 miles again this weekend after last week’s gargantuan effort.  But I had a beautiful spring day and a picturesque route on my side.  Plus, the night before, my sister Hersha, had looked up the top ten foods for marathon runners and had managed to feed me about six of them!  Fuelled and ready!!

I was running along the Middlewood Way, a once upon a rail line that used to go between Marple (just south of Stockport) and Macclesfield.  It’s a ten mile stretch and the aim was to go to Macc and back. The beauty of old train routes is that they ain’t too hilly and this particular one cut a gentle swathe through countryside and farmland making for a wonderfully tranquil path.  No traffic, a lot of birdsong and the occasional horses hooves clopping along. Idyllic.

But. I started off with quite a sore left thigh that had been annoying me for most of the last week.  It felt like a solid, tight ball that made my leg heavy and less jiggly.  By that I mean that the muscles inside didn’t feel like they were moving at all. I should really ask someone properly technical to explain it to me some time!

It finally began to loosen up and ‘jiggle’ by about mile eight but up until then I had been trying to not peg leg and over compensate with my right side.  I think this took a bit of the steam out of me.  Ironically though, my thigh has felt great ever since!  So maybe you just need a really long run to iron out all the niggles.  And super bonus, my sister and her kids came to cheer me on at a couple of points en route which was fantastic and definitely kept me going!

(I had to run back slowly so that my sister could take the pictures and then turn around again!)

From about mile 17 the running was interspersed with a bit of walking as I was really shattered but I got back to the carpark in Marple and clocked a nice 19.75 miles in a little under 4 hours. That was good enough; I definitely was not going to try and run some extra circles to get that quarter mile. We had ourselves a very nice Sunday roast nearby at a pub called Oddfellows, meeting up with sister number two, Usha and her boys which was a lovely surprise and rounded up the day back in Stockport with a cup of tea and some yummy blueberry and dark chocolate muffins made by my niece!  All in all, a terrific day! 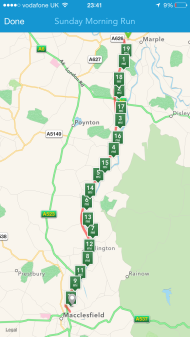