This is actually the day after as, well, who has time to write when someone’s handing you a glass of champagne or three?

I’ve been brought back to the west coast again in less time than the Tony Blackburn radio show. This automobile idea may just catch on. The first lot of washing is on and I’m slouched on the sofa. Back to normal then. So, one last report.

Yes, there are pictures of us all on Facebook happily dipping our boots in the North Sea but you know, it wouldn’t be like Wainwright to give us a straightforward final day. In fact, the way’d he’d planned it, we would have started in Glaisdale, thereby adding another 4 miles to our count for the day AND stopping me from climbing into the beating heart of steam train! But really, you can’t complain too much when the final leg of your journey takes you through moorland and woodland and along the tops of the cliffs, especially when it’s all on a beautiful sunny day.

We had all put on our Claire House charity t-shirts ready for the big finale. But before that my train had come. It was sitting idly on the platform smoking away and waiting for the starting whistle to blow.  I couldn’t resist asking the engine driver if I could climb aboard to have a look and happily he said yes! It was a brilliant start to a memorable day.

We ‘climbed’ the road out of Grosmont, as that is the only way to describe tackling the 1 in 3 gradient.

It took us back onto the moors and from the tops there I could now properly see the sea! En route though we lost sight of it again for a while but our path through Littlebeck hamlet and the Little Beck woodland nature reserve was a happy diversion. These woods felt even more magical than yesterday’s East Arncliffe Wood by Glaisdale, and that’s definitely saying something. It felt more ancient and tranquil and I could imagine, if I sat in one place for long enough, that I’d see so many different birds and animals. There was also a tea garden at the other end which looked really lovely but we had to keep walking, as we still had a long way to go 😦 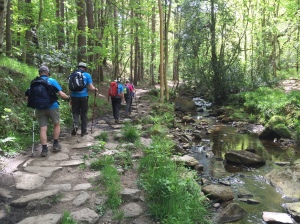 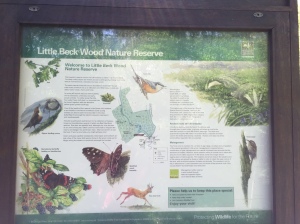 There was a signpost in the second half of our walk that said 3.5 miles to Robin Hood’s Bay.

But we did, of course, decline this direct path. Wainwright began the Coast to Coast trail by taking us North West along the edges walking away from St Bees. Paul pointed out that it was a nice symmetry that we’d ended up walking South East along the edges down towards the Bay. I can say, having seen them both just the once that they are comparable in beauty (one slightly negative point about this side though was the number of flies that were about today. A hell of a lot, and all of a sudden near the end! Don’t know if it’s always like this on sunny days?). Sally was saying that she’d quite like to (but not all in one go) get around all the coastal paths of the country. Quite a feat if she manages it. 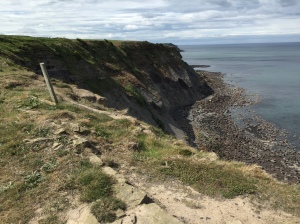 Eventually, and finally, we started passing the first houses in Robin Hood’s Bay. My feet were tired and they were telling me but as we walked down the streets I think we all started to get a little excited. I wasn’t sure where Simon and Heather were going to meet us as we passed both their cars outside the B&Bs but none of us could ring because the signal was pants.

The last street down is a very steep descent, probably on a par with our first street up this morning. As we came round the final corner some whoops and cheers erupted and there were Simon and Heather and some other people I didn’t recognise, holding up a big banner for the Six Pack!! What a welcome! I couldn’t stop grinning! As we crossed through their banner like champions through the tape Simon cracked open a bottle of champagne and started filling glasses. The ‘other people’ were John’s son and daughter and her partner.  They’d made the banner and come to surprise their dad and Simon and Heather had met them accidentally at the water front!

It was the most amazing ending to an amazing adventure!