Today was a good day!

Yes we had another hill to mount, yes it was another windy day, especially on the tops, and yes we had bogs and plenty of them and yes a few of us were crawling out of them on our knees. But we were only doing 12 odd miles and the sun was shining and after the hard slog of the last couple of days we could afford to take it a bit more gently.

At breakfast we were still feeling sluggish and some of us were thinking we’d like to do the low green route (there are 3 routes – red, blue and green that you can do depending on the weather and the time of year) and some of us favoured the red. We decided to decide at the splitting point.

We found a great Coast to Coast signpost near the start that showed us our origin and destination and how far we’d come.  Our actual mileage to date is a bit higher owing to the circuitous route down from the Lakes. But it was pleasing to see that we were close to half way point.

Progress to the diverging point had been pretty good. It was a bit steep and ‘phewy’ in a few places, especially with full bellies, but the ground was good and generally dry.  Therefore we all opted for the red route that would take us up to the top of Hartley Fell and over the first obstacle of the Pennines.

Nobody seems to know much about the Nine Standards. These are nine prominent dry stone cairns (we’re not talking about those mini pyramids; these are tall structures, taller than Paul so that’s pretty tall!).  They fall very close to the dividing line between Cumbria and Yorkshire. Old maps and documents fairly certainly prove that they’ve been about for at least 500 years and maybe even 800 years but their original purpose is unknown. Some of them have had to be rebuilt because they get the full force of the weather but they do stand out quite dramatically and on a good day there are spectacular views all around.  The Standards are only on the Blue and Red routes and very often the mists are down and the weather makes it too dangerous to come here so we were very lucky. 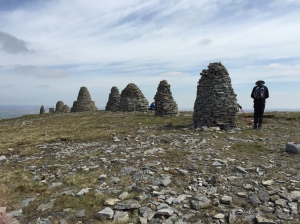 Further on from the stones, we were starting to get into the boggy bits to get over the tops and down the other side. You’d think, with the amount of practise we have had that we’d be better at staying dry but there were still a few mishaps.

We accidentally followed the wrong path down to the road, earlier than we should have done, but it was a happy accident as it meant a little less squelching which I believe everybody was rather happy about. And it also meant that we got to see some sheep being herded up the road to a new field by a farmer and his amazingly expert Collie dogs. 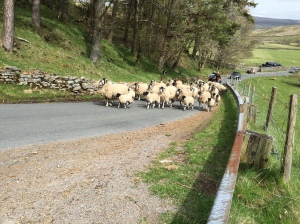 Coming into Keld we were due to stay at a place called ‘Butt House’.  Of course, being of a puerile mind it always made me chuckle when mentioned but I have to say that this B&B has beat the other ones we’ve stayed at hands down. A proper boot room when you come in to get all your outside gear off, baths in several of the rooms, lovely food, and absolutely lovely hosts in Jackie and Chris. And we were finally in Yorkshire.